Long Island Iced Tea is a classic drink everyone has at least tried once. It is a perfect mixture of exceptional ingredients that all create a spectacle of flavor and amazing colors. Now, people who are not familiar with this drink usually think that Long Island iced tea is an actual ice tea that is an upgrade to the regular iced tea beverage we are used to. However, Long Island is actually an alcoholic beverage that is perfect for a fun Friday night out.

So, as an alcoholic beverage, it is really important to know what it really contains. Alcoholic beverages, especially ones that mix several types of alcohol can be rather tricky. They can seem especially tasty and pleasant to the palate but can make you very inebriated in a short time. So, whether you simply want to know what you’re drinking, or you want to make Long Island iced tea at home, here’s a little insight into the actual ingredients used to make this boozy bang of a drink. So, let’s get started.

Before we get into the ingredients, it is important to learn a little something about this beverage, where it comes from and what its cultural background is. Now, it is believed that a man named Robert Butt has invented Long Island iced tea in 1972. He allegedly invented this drink to enter a contest sponsored by Triple sec. The name for this drink was inspired by his workplace at the Oak Beach Inn on Long Island, New York.

On the other hand, there is a claim that the drink was first invented in the 1920s during the Prohibition era in the United States. It is believed that the drink was invented by an ‘Old Man Bishop’ in a Long Island community in Tennessee. This, however, seems to be a different type of Long Island iced tea as it had some different ingredients. Nevertheless, the variations to the drink became a standard, as different communities added their local twist to the drink. Nowadays, bars across the country and the world serve, of course, the standard, original version of Long Island iced tea, but surely enough, other varieties seem to be gaining popularity with different communities and consumers. Some of the most famous Long Island iced tea include Long Beach iced tea, Tokyo Iced tea, and the Adios iced tea.

It is important to mention that there have been several cookbooks in the 1960s, featuring Long Island iced tea recipes. The cookbooks were Betty Crocker’s New Picture Cookbook from 1961 and the American Home All-Purpose Cookbook from 1966. These cookbooks featured some different versions of this drink, that included few additional ingredients. 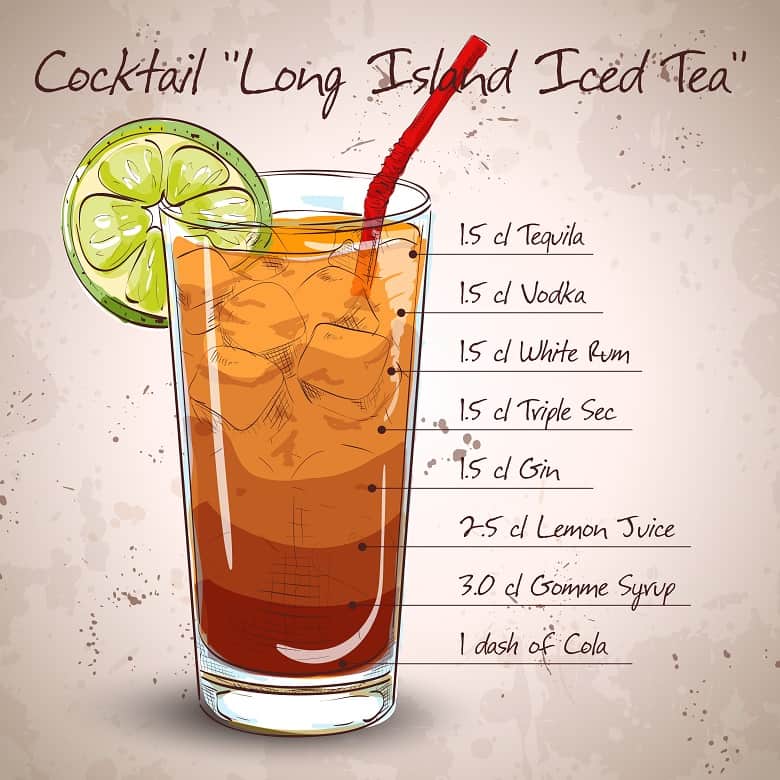 In the following paragraphs, we are going to take a look at the standard Long Island Iced Tea ingredients. Overall, Long Island iced tea contains five shots of alcohol, a sweet and sour mix, and fuzzy drink or juice, according to your preferences; 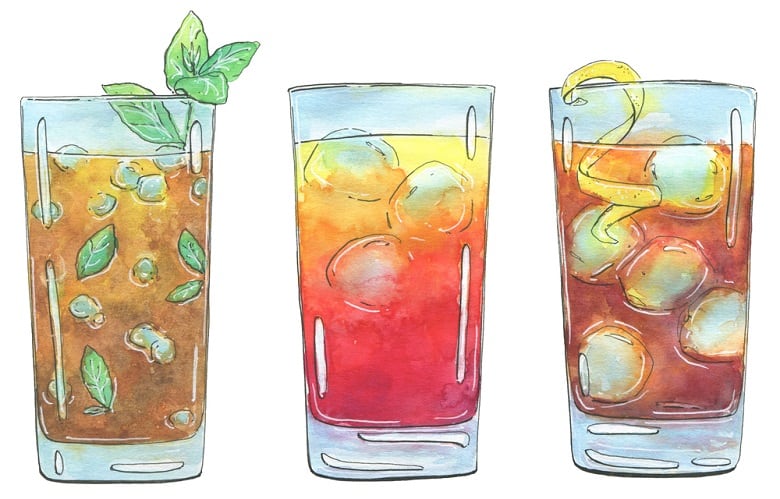 Some Tips and Info about the Long Island Iced Tea