Thai iced tea is extremely popular in South East Asia as well as in Thai restaurants across the world. It is a quintessential Thai beverage that is usually the first thing tourists discover when visiting Thailand. Also known as Cha Yen (in Thai), Thai iced tea is a great sum of all things Thai; it has a wonderful milky and floral flavor, as well as the unique amber, or yellowish-orange color. Thai iced tea is an exceptionally refreshing beverage, that will keep the heat away from you while visiting the hot and humid Thailand.

However, you might be wanting to prepare this beverage for yourself, or for your guests. This beverage will definitely make a statement at a family gathering or dinner too. Therefore, we’ve decided to present you with the original, traditional Thai iced tea recipe. In the following paragraphs, you will learn about Thai iced tea, as well as how to make it yourself. Let’s get started!

Tea was originally brought to Thailand by the Chinese. In the 1980s, drug trafficking between these two countries was a major problem, so to displace opium, the Chinese turned to tea as a profitable business idea. However, this story is just one of many speculations regarding tea import and production in Thailand.

When it comes to Chai Yen though, the mystery of origin seems to be even less clear. Many suspects that Thai iced tea as we know it today was an innovation of a Thai leader known as the Field Marshal Pibul Songkram. The leader was very fond of Western culture, hence the unusual ingredients, like milk for example. Other than this, there is actually little or no other information on the origin of Thai iced tea. Nevertheless, this beverage managed to become a worldwide known drink; from the West to the East, everybody likes some Chai Yen, especially in the summer.

Why is Thai Iced Tea Orange Though?

The unique orange color of Thai iced tea has always been a known mystery, to foreigners and tourists especially. There are several theories that provide a valid explanation regarding the origin of this unique phenomenon. One theory claims that people in the 19th century would brew their tea leaves several times, instead of discharging it after the first use. So, in order to keep the tea good, flavorful and rich even after several brews, it is believed that people started adding flavorings and coloring to the tea. 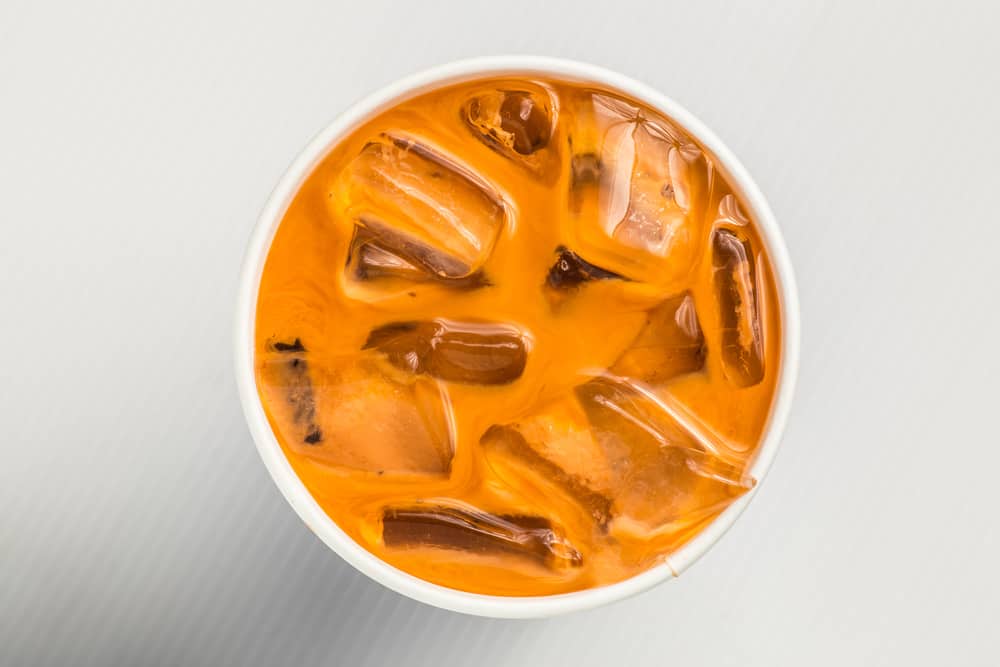 Another theory claims that the restaurant-style Thai iced tea is made with black tea which contains food coloring and other ingredients, like sweeteners or vanilla flavoring. It is also a known story where it is believed that Thai iced tea was made with brewed Ceylon tea. However, this tea became very expensive, so there needed to be a substitute. People started, therefore, using the Bai Miang local tea which is a type of Assam black tea. To the tea, food coloring and additional flavoring were also added.

So, one thing in common that all of the theories have is black tea and food coloring. Nowadays, it is not a mystery that the tradition of Thai black tea contains food coloring. One of the best known, and globally beloved Thai black tea is called Cha Tra Mue, also known as the Number One Brand in English. This tea is most of the times used for the preparation of Thai iced tea, because of the orange color it creates, as well as for the wonderful vanilla, sweet flavor, and aroma.

More: Best Black Tea: Everything You Need to Know

The One and Only Way of Making Thai Iced Tea

Whether you’re wandering the streets of Thailand and ordering street food, or you’re in a Thai restaurant anywhere else in the world, you will experience Thai iced tea the same. The ingredients do not change and there is generally one and the only way to make Chai Yen. So, if you want to make this delicious and refreshing beverage yourself, make sure to check the original and traditional Chai Yen recipe; 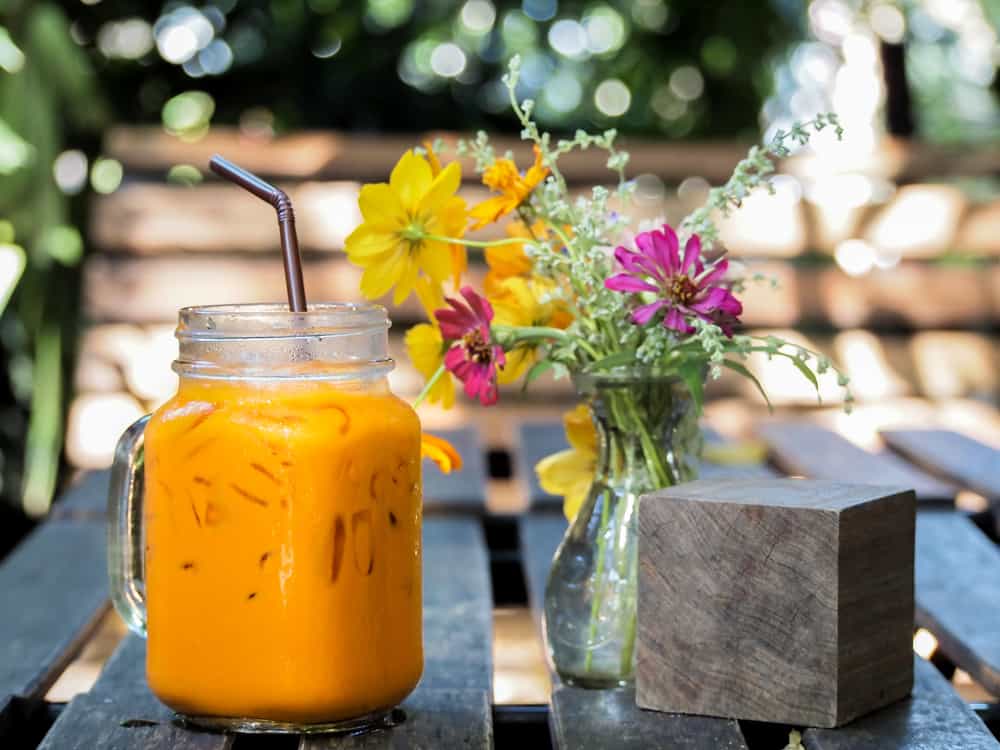 Step 1 – The first thing you will have to do when it comes to Thai iced tea preparation is to boil the water. You can choose whichever way of boiling you want; water boiler or microwave boiling seems to be the fastest way. Then, you will pour a cup of boiling water over 1 tablespoon of Thai black tea. Let the tea steep between 3 to 5 minutes. You can try steeping the tea in a so-called tea sock that is used traditionally in Thailand, but you can also use a regular filter (like paper or tea filters) to infuse the tea. Only make sure that your end-product is leafless when pouring it into the mixing cup.

Step 2 – Take a mixing cup; in this cup, you will mix other ingredients with the tea. To the cup add 2 teaspoons of sugar, sweetened condensed milk and evaporated milk. The ingredients can vary in amount according to your taste preference, so make sure to taste the mixture during the preparation. Make sure that all the ingredients are well mixed together.

Step 3 (Optional) – Now, a good Thai iced tea is known to have a little bit of foam, froth and a certain creaminess to it. This is achieved by transferring the aforementioned mixture from one pitcher to another. So, if you want to do this step, make sure to transfer the mixture from a certain height between the pitchers. Do this to your own preference, depending on how much froth or foam you want to achieve. You will probably also have some bubbles forming, which always look good in a drink like Thai iced tea.

Step 4 – Once you have a done mixture, now is the time to add the tea. Make sure to strain the tea into the mixing cup, and stir. You will witness a beautiful transformation of colors into a bright orange that is characteristic of Thai iced tea.

Step 5 – At this point, you will prepare your drinking glass filled with crushed ice or ice cubes. We recommend you fill the glass full, as the ice melts quickly when the tea mixture is poured over. We also recommend you crush your ice as the effects of cooling down the tea will be more efficient, and the overall result is much better visually.

Step 6 – This is now your final step; make sure to drizzle some evaporated milk on the top, and also add some evaporated milk to the iced tea to achieve more creaminess and color gradient which looks exceptional. Refrain from stirring the mixture at this point, as the beautiful layered effect will disappear. Add a straw and you’re good to go and enjoy your refreshing and super tasty beverage.

If this is your first time finding out about Thai iced tea and you want to make it just right, we’ve prepared some more tips and tricks for you.

The Arbor mixture also does not contain any artificial food coloring, so do not expect the vibrant orange color; this tea, when milk added to it, will have a beautiful light brown color. 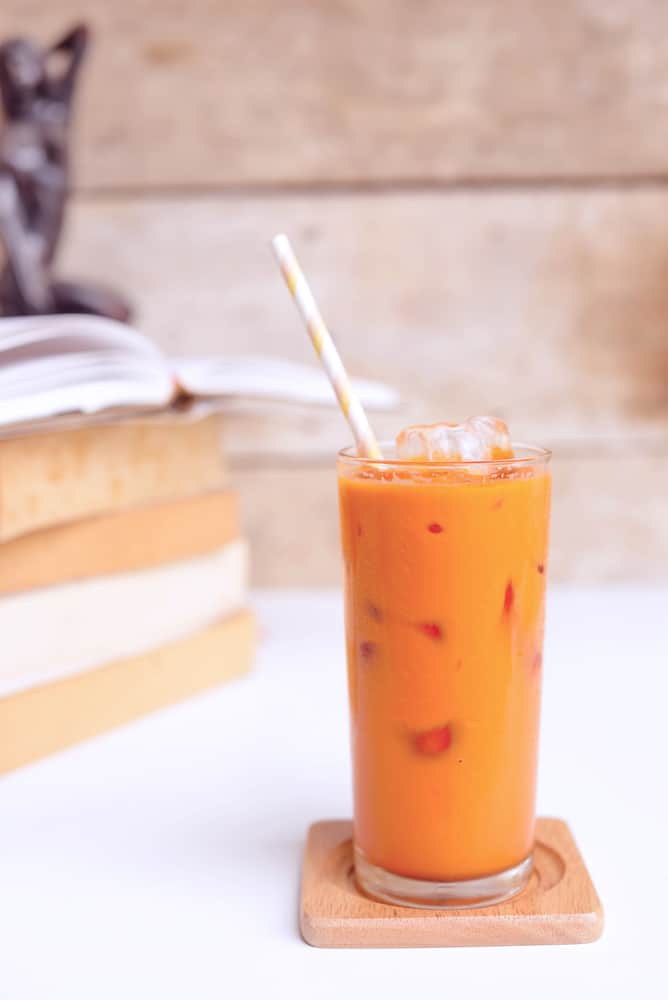